It's no secret that at this blog we're huge fans of Feu! Chatterton, and have been since their debut album came our way. 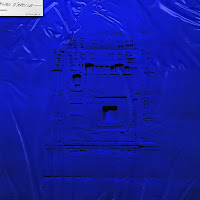 They embody much of what I love about French music, the idiosyncrasies, the way they don't take themselves too seriously but remain unashamedly intelligent and their style which manages to be simultaneously mock pretentious and completely natural.
So their third album Palais D'Argile is something we're pretty excited about, and while waiting for it to drop we were delighted to see this appear.
While an acoustic session, it's a magnificent piece of work. It's also so perfectly shot it's only after a few watched that you realise it's just one shot for the duration of the song.
The song is originally by Irish poet William Butler Yeats, it's English title being Before the world was made. It's recently been recorded by Carla Bruni - on her No Promises album from 2007 - and The Waterboys on their 2011 An Appointment with Mr Yeats album.
Palais D'Argile is released on March 12.
Posted by John Kilbride at 15:34 No comments:

A quick plug for an event taking place tomorrow that's been organised by the Institut français du Royaume-Uni in London to mark the 30th anniversary of the death of Serge Gainsbourg.

Author Jeremy Allen, whose biography of Gainsbourg Relax Baby Be Cool: The Artistry and Audacity of Serge Gainsbourg has just been published, is in conversation with French music expert David McKenna.

Gainsbourg is without a doubt a towering figure in French music and culture in general, his work extending to film, literature and television. While his notoriety has at times surpassed his artistic endeavours, even thirty years after his passing he remains a significant influence and a cross-genre innovator.

I'm reading Allen's book at the moment, and it's probably the definitive book in English about Gainsbourg. I'll have more to say about it when I've finished it, needless to say, it's both incredibly informative and very entertaining.

Tomorrow night (Tuesday March 2, 7pm) you can hear more about the man, the musician and the myth. Get full details at the Institut français website.

Posted by John Kilbride at 15:11 No comments:

So this is how it ends for Daft Punk. Not with a whimper but a bang. 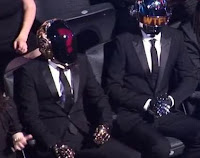 I can't think of an act in recent years - if ever - who have raised the profile of French music to such an international level.

Guy-Manuel de Homem-Christo and Thomas Bangalter's legacy is incomparable, a swathe of awards, an iconic international hit, and a visual identity that would make Kraftwerk jealous just being some of the high points in a career that covered four albums, a soundtrack and some absolutely classic records.

But 2013's  Random Access Memories looks like their last full album. Work since then has included co-producing Kanye West's Yeezus, an unreleased track featuring Jay-Z,  performing on Pharrell's  G.I.R.L. album and The Weeknd's Starboy and I Feel It Coming hits.

While these were probably the kind of side projects that would be the high point of many artists' careers, it has been a relatively quiet period. No tours, no further soundtracks despite occasional rumours.

Footage from their 2006 Electroma film makes it clear they've reached the end of the road. Thomas Bangalter goes out with a bang. A slow-motion desert explosion that's as cinematic as anything in Zabriskie Point.

Posted by John Kilbride at 16:22 No comments:

The era of lockdown and social distancing has been a challenge for musicians on many levels. Lack of income from live performances, lack of access to their audience and isolation from their normal social and artistic circles are just a few.
However, difficult times have also led to some interesting solutions. Musicians are nothing if not creative.
This live set by Thylacine has been one of the most enjoyable sessions I've seen for a while, showcasing one of the most innovative figures in French electronic music on a unique stage. Versailles provides a  spectacular backdrop, its opulence, grandeur and sheer size contrasting with the solo figure filling the air of this historic monument with the most modern of sounds.
But the size of the setting and the empty spaces also suggests the lack of an audience, he's facing empty space and alone on stage. No surprise that a live date he had scheduled in Paris for next month has been postponed until November.
Thylacine's recently released a new single 1978, a collaboration with Yan Wagner, from the soundtrack for the French TV show OVNI(s).
Posted by John Kilbride at 09:32 No comments:

The (welcome) return of Feu! Chatterton

Ready for the new world?

We've been waiting for something new from Feu! Chatterton for a while. It's not that they've been away for long, just we've been impatient.

With good reason. Their two albums, 2015's Ici le jour (a tout enseveli) and 2018's  L'Oiseleur are among our faviourites in recent years, each a heady mix. Rooted in French poetic lyricism, but inhabiting a jazz-informed indie rock landscape that few others dare venture into without falling face first into the swamp of pretentiousness or tumbling into the chasm of joyless self-indulgence.

Yes, it's a bit arty, but they walks that fine line with a swagger and don't take themselves too seriously. It's hard to imagine a band like this from any other country.

If anything makes us hopefuly for 2021, its that fine bands like this have started to re-emerge from isolation and hibernation. The world might be new, different and unfamiliar, but it's been waiting for them to make it a little bit better.

Posted by John Kilbride at 16:36 No comments:

Another winner from La Femme, a band who have over a few years become one of this blog's favourite acts.
There's more than a little flavour of late 70s/early 80s electro-punk going on here, reminiscent of acts like Metal Urbain, Jacno or KaS Product. It's hard not to like it.
The eye-melting video was put together by the band themselves.
The new track follows the singles Cool Colorado and Disconnexion which came out in November and December last year.
Foutre le Bordel and the other two tracks all feature on their forthcoming third album Paradigmes, due out on April 2 and available to pre-order now.
Posted by John Kilbride at 16:30 No comments:

The song, the title track of Christophe's 1974 album and top ten single, was co-written by Jean-Michel Jarre who was then a musical collaborator with Chrstophe. He'd already worked as lyricist for Christophe's 1973 album Les Paradis perdus. For an artist now best known for producing instrumental electronic work, it's quite an achievement to have been involved in creating two songs regarded as French language classics,

M's cover follows other artists such as Alain Bashung.

It's a lovely version, performed during a live stream in April last year and it appears as one of the 35 tracks on his Le Grand P'tit Concert -M-aison streaming album that features cover versions and stripped-down arrangements of his own work. It's a great collection and well worth a download.

Posted by John Kilbride at 17:09 No comments: