Tickets go on sale today for this year's Rock en Seine festival, at the Domaine National de Saint-Cloud near Paris.

Billie Elish headlines the first night of the four-day event. Across the other three days acts like Florence + The Machins, Placebo, The Strokes and The Chemical Brothers have been confirmed.

It's more of an international music event, but there remains a significant French presence on the bill, with Flavien Berger and Bertrand Belin taking part.

More artists who are playing will be announced in the run-up to the festival. 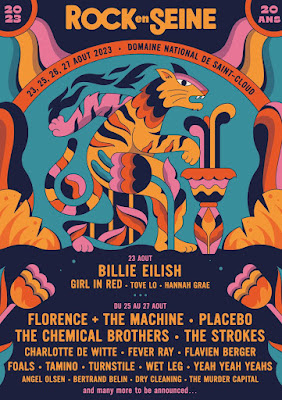 Posted by John Kilbride at 14:31 No comments:

Sad to hear of the death of David Crosby the other day. I know for many Crosby was more a symbol of the 1960s, from the peace and love Woodstock generation to the problems in his later life, he was almost a metaphor for his times.

I was a fan of his music, perhaps not surprising given his considerable links to the Grateful Dead, particularly on his If I Could Only Remember my Name album. The collection his first solo album from 1971, featured contributions from many of the leading lights of the San Francisco scene, from  CSNY collaborators Neil Young and Graham Nash to members of Santana, The Dead and the Jefferson Airplane. the musicians hung out at the Wally Geider recording studio in San Francisco and became a loosely affiliated group, the Planet Earth Rock 'n' Roll Orchestra, PERRO for short, who would work on this album as well as Airplane solo releases and a few casual gigs.

While songs like Cowboy Movie, Tamalpais High and What Are Their Names feature members of the Grateful Dead in as spectacular musical form as they ever were in the studio - Garcia's snaking guitar lead on What Are Their Names a particular stand-out - it's one shorter piece that concerns us here: Orléans.

It's just under two minutes long, and a solo vocal piece from Crosby, but it's a spectacular one. It features the special brand of harmonies that Crosby could do, it's the kind of piece that defined his sound from The Byrds, to CSNY, to his solo career. Based on folk music and updated for the modern audience, but retaining its apparent simplicity and honesty.

It is of course originally a French folk song, a children's song dating from the 15th century Le Carillon de Vendôme. Crosby simplifies it, losing the (short) verses and repeating the chorus, a list of French towns that remained in the control of King Charles VII during the Hundred Year War.

It's an unashamedly beautiful piece of music. As time marches on and hearing deteriorates, it pleases me no end to have heard it.

But as is the way with folk music, songs get amended and passed down through generations and locations, words get changed to suit different circumstances.

So it is with this song. In 2011 the French band Justice released a song on their Audio, Video, Disco album Ohio. While the song is undeniably a Justice piece, there are more than a few similarities

It could be seen as a French band re-interpreting the Crosby version of the original, but using the names of American states instead of French towns. It's a simple but effective technique, both reclaiming it and adapting it, making a gesture to the American version of the song that introduced it to thousands who would probably never have experienced it had it not been for Crosby. Again, in true folk music style they adapt it for a modern audience.

The fact that Ohio was also the title of a (very different) CSNY song was, I suspect, not lost on Justice when they chose that state in particular as the title of the song.

Funny how the wheel turns. I'm sure Crosby dug it.
Posted by John Kilbride at 22:02 No comments:

An up-close-and-live-session performance of the song Dysfunktion by Serpent, the project fronted by Lescop.
It's a funkier proposition than his previous releases, his self-titled debut from 2012 and its 2016 follow up Écho were much darker and more electronic propositions. Needless to say, we absolutely loved them
Serpent has been a going concern since 2020, with the release of Distant Call the lead track from the Time for a Rethink EP.
There certainly seemed to have been a bit of a rethink, although it wasn't perhaps as dramatic as it first seemed. He hadn't - as they would have said in the late '70s/early '80s - "Gone disco", just expanded his musical horizons and the post-punk flavour that was at the forefront of his earlier releases is still there.
Just look at the song titles: Ice Age; Waiting in the Park; Love/Hate; and even Dysfunktion could all be  the names of obscure tracks from first-wave cold-wave acts, many of whom were not afraid to embrace funk, reggae and dance music. And they were all the better for it.
Dysfunktion is the title track of a six-song EP released in May last year with Don't Waste my Time emerging as a single ahead of it.
Posted by John Kilbride at 19:40 No comments:

There are two nights at the Accor Arena in Paris for Madonna coming up this autumn, with shows on November 12 and 13.

The concerts are the only French dates of her Celebration Tour, marking the 40th anniversary of her career. The tour begins over the summer, with dates in North America before making its way to Europe, with shows in Rome, Milan, Copenhague, Cologne, Berlin, Lisbon and the O2 Arena in London.

It's not always been a celebration for Madonna to play in Paris, as her show at the Olympia in July 2012 made clear. During her MDNA tour she played the famous Paris venue, a much smaller hall than the arenas she played elsewhere on the tour. The intention of the show was to give her the opportunity to pay tribute to French artists and cinema, and how the country welcomed inspiring artists. She clearly included herself in that category.

Tickets were expensive and initially limited to fans before being made available to the public and the show was streamed internationally. It wasn't exactly without a hitch.

Despite a cover of Je t'aime... moi non plus, possibly the most obvious cover she could do in the whole history of French music, the 45-minute running time of the show was met with scorn by many who had paid almost 300 euros to attend the event. Water bottles were thrown at the stage with cries of "Recompense!" from the audience. It was not a happy ending to what she probably expected to be a warmly received intimate show in front of fans.

She commented later on her website: "Playing the Olympia was a magical moment for me and it was real treat to do this special show for my fans and be so close to them. Unfortunately at the end of the show – after I left the stage – a few thugs who were not my fans rushed the stage and started throwing plastic bottles pretending to be angry fans."

She added: "nothing can take away or ruin this very special evening for me and my fans. When I looked out in the audience, everyone I saw had a smile on their face. I look forward to having this wonderful experience again."

With two shows at the Accor Arena scheduled, she's unlikely to have the time to fit in a show at L'Olympia, but you never know.

Posted by John Kilbride at 11:30 No comments:

A sweet and low-key performance by Flavien Berger for COLORS.
Les yeux, le reset is his new single, and it's an effortlessly stylish one
Last year his 2015 Léviathan album was re-issued, and the song D'ici là released as a single in November.
Berger has an enviable position, where he's a popular artist but one who is able to release some genuinely experimental electronic work. Despite his incongruous appearance, there's some sharp work going on and a feeling that while he's pushing at artistic boundaries, he's doing it with a sense of humour and fun.
Any new release by Flavien Berger is a real treat, and it's a pleasure to hear this one.
He's playing L'Olumpia in Paris on 4 May and it's already sold out.
Posted by John Kilbride at 10:00 No comments:

So this is a Scottish-based blog that celebrates French music. How could we not be blown away by a French act that celebrates Scottish music?!
Spiderland have been around since the 90s, and based in Douarnenez in Brittany, although their influences came from further afield. With their name obviously a nod to Slint, their sound was more in tune with some of the more interesting acts on the UK indie scene during that era.
They released their self-titled debut album in '98. The band came to a halt a short time later, but members became involved in other acts including Kaiser Palace and Coude.
Time moved on, and the members reconvened as Spiderland, releasing an EP Milestone in 2020. The album A Gentle Breeze followed last year. It's a great release, thoroughly worth investigating and enjoying.
The new video is a cover of a song by legendary Scottish act The Vaselines.
Spiderland announced the song as "A little present for the start of the year", adding "You're aware of our interest in Scottish music. BMX Bandits, Teenage Fan Club, The Pastels...and the Vaselines!"
We just need to get them over here to play to a Scottish audience! Mono in Glasgow would be ideal...
Posted by John Kilbride at 11:55 No comments:

What is it about Bordeaux producing decent rock bands?
I hadn't come across Bilbao Kung-Fu until recently, and their effervescent punk pop is as catchy as it is fun.
A live show would be a life-affirming and energetic experience, I reckon. Last year saw them gigging extensively in France, no doubt winning friends and influencing people around the country.
Their new EP follows their Arc en Ciel debut EP which was released in 2021.
The new video is (literally) a punchy interpretation of the song. Hard-hitting, so don't try it at home.
Oh! comes from the band's second EP, released on the Toulouse-based Kaa Productions. If 2023 is anything like their previous years, expect them to be playing live somewhere in France most of the time
Posted by John Kilbride at 09:41 No comments: