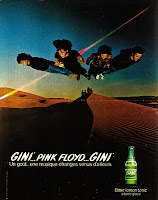 I thought that with the current interest in Pink Floyd - with the release of the band's back catalogue in different editions ranging from remastered re-issues to massive box sets - a mention was deserved of a French advert that the band did in 1974 for Gini, the popular French soft drink.

The deal was that the band would appear in an advertising campaign, get some money and the company would also put some money towards the band's next French tour, keeping ticket prices down for the fans.

The campaign features a number of magazine adverts featuring the band, in a Dark Side style, obviously looking thirsty because of the desert they've been dubiously superimposed beside in those pre-Photoshop days.

It was about a decade before such commerial involvement between bands and brands became commonplace, and it apparently left a bad taste in the mouth of many of the band's fans. Perhaps more the taste of sour grapes rather than bitter lemon.

The band played a French tour - supporting their Dark Side Of The Moon release and previewing some of the material that would appear in their Animals album- in June 1974 ahead of their British Winter Tour 74, their first live airing of the Dark Side album with the circular screen that would be a trademark of the band's live shows from then on.

However, the Gini sponsorship mean that the drink was promoted in the halls the gigs were held in.

The sponsorship - and the bad feeling that it generated - inspired a song by the band, the so-far unreleased Bitter Love, also know as How do You Feel.

The band were so sullied by the experience of involvememt in the world of commerialism that they never repeated the move. Except for an advert for Nurofen (for headache relief!) and a tie-in with Volkswagen cars that saw a special Pink Floyd edition of the VW Golf released.

Here's a great vintage Pink Floyd clip from French TV show Bouton Rouge with Let There Be More Light. Got to love the presenter Pierre Lattes grooving away like a fifth member of the band. Lattes would later produce the seminal Camambert Electrique album by French-based prog psych band Gong a few years later.